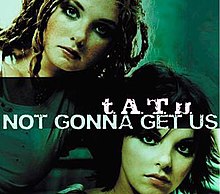 
Released in May 5th 2003, Not Gonna Get Us is the followed up single after the international smash hit "All the Things She Said"

Musically, the song is a eurodance-inspired song with breakbeat and industrial music elements, and lyrically it talks about the group running away from people as they don't understand their love towards one another.

"Not Gonna Get Us" received mixed to positive reviews from music critics, praising the production and highlighted the song as an album standout.

The song was a commercial success worldwide, peaking inside the top ten in countries including Finland, Italy, Austria, Japan, Sweden, Belgium, Ireland and the United Kingdom. The song also peaked at number one on the US Hot Dance Club Songs, becoming the group's only number one single in the US component charts.

An accompanying music video was shot for the single, where it starts with the girls getting a mugshot, until escaping to a truck, where they drive off through snow in Siberia. The song was shot by Ivan Shapovalov, who also features in a cameo appearance in the song as a construction worker. The song also received a minor controversial image, where it featured a more rebel image. The song has also been performed on all of the group's concert tours, and was also performed at the MTV Movie Awards in 2003. In 2009, t.A.T.u. played a special concert featuring the song at the Eurovision Song Contest with a Russian Army Choir, the Alexandrov Ensemble.

The words "нас не догонят" made their way into 2006 Russian Dictionary of Modern Quotes (Slovar sovremennykh tsitat).[2] In February 2014, during the opening ceremony of the Olympic Games in Sochi, t.A.T.u performed "Нас не догонят".[3] Additionally, the song was sung later in the ceremony when Russia's competitors entered the stadium.