What was expected to be the biggest match in Mexico of the year, a hair vs. mask match with Rush vs. L.A. Park, is not happening.

The story behind it is sketchy, because Park (Adolfo Tapia) came to Arena Mexico on 5/25, immediately started up a feud with Rush that had been hot in several independent matches around Mexico in recent years. The Park return was huge, as crowds immediately grew from 5,000 to 9,000 or more most weeks, and it opened up the door for other AAA wrestlers, Penta 0M and Rey Fenix, to come in and the crowds have remained big even when Park isn’t there.

What made things even more interesting is that Park was putting up his mask at TripleMania on 8/25, AAA’s biggest show of the year, and then with Rush on 9/14, CMLL’s biggest show of the year. Until Park, both companies were not using wrestlers that worked for the other side, and not only that, banned their talent from working on independent shows against wrestlers from the other side. But Park, and then Penta and Fenix drew so well that foundation, as grudging as it may have been for both sides, started to change.

Still, those at AAA have claimed for some time that there would not be a Park vs. Rush match mask vs. hair match this year, since Park had told them that. The belief at first was that Park was going to lose his mask to Rush, and not lose it at TripleMania. It was, similar to Dr. Wagner Jr., Park’s feeling that at almost 53, his career was winding down and he could get a big payoff for his mask. Park and Wagner for years were trying to get promoters to pay them huge money for an independent mask match, but as one promoter told me, the price they wanted was so high you could never justify it for the gate unless you could get cartel money to launder to finance it. And well, that never happened.

Still, Park and Rush continually challenged each other to a hair vs. mask match whenever Park worked at Arena Mexico, which were five shows since late May, including a double count out in a heated singles match on 6/22.

The first sign was when Anniversary tickets went on sale a few weeks ago and they were less expensive than expected. The appearance is that CMLL is not interested in Rush losing his hair, which would be the way out of this match even if the whole thing started with Park being willing. Park has pushed that he is willing to lose the mask, but whether the payday wasn’t good enough, or more likely, his career being revitalized over the last three months at a level none expected made him feel, and correctly so, that the time wasn’t right.

Park is now in great demand all over Mexico, the hottest he has been in years and perhaps drawing the best he has in a long career. Park is scheduled to be one of the key players going forward with MLW, and he needs the mask to be at that level. There is also talk of interest from other U.S. promotions, notably Impact. 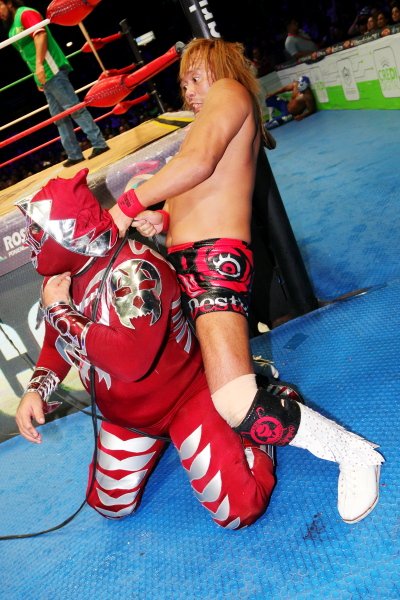